To Fight or Not to Fight...That is the Question

In a game of chess, white initiates and has the first-move advantage, and black absorbs and defends against white's attack.  If black is successful, he will have created a trap of sorts for white to fall into.  An over-aggressive white play falls right into black's hands if black can build a good defense.

We're in the process of defending ourselves against 2 frivolous lawsuits that have been going on for a year.  The allegations have been desperate.  Our accusers have lied under oath.  The damages they're claiming are completely imaginary and fictitious.  Still, we've had to pay up the nose to have 2 different law firms represent us in defending our case. 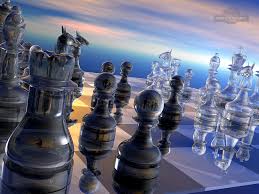 I'm not an attorney.  And the outcome of the trial is yet to be determined.  But I must admit that firing my lawyers was probably the best decision I made.  Why?  Because they just don't give a crap.  The irony is, they will charge you a fortune to do a terrible job for the simplest of things.  They say the only ones who actually win in a legal dispute are the lawyers.  I would agree.  So, I figure I've already won half the battle by representing myself.  We shall see if this decision proves fatal.  Ultimately though, nothing related to money is fatal.  If it's a money problem, it's not really a problem.  If we think the problem is ever "out there", then that very thought is the problem.

There's a lot we don't know, but we try to stay humble, learn quickly and apply what we know.  We're always willing to try something new and give it our best shot.  That's what makes us - my wife and me - the entrepreneurs that we are.

In the endgame in chess, the king comes out to play.  During the opening stages of the game, you castle to try to hide the king from the heat of the battle.  But as the game progresses towards the endgame, and the major pieces are off the table, and the overall strategy has been identified, it becomes safe and sometimes necessary for the king to come out.  Similarly, we've had to take the bull by the horns in doing the legal work ourselves these past few days.  We've had to learn a lot and force ourselves into the discomfort zone.

The reason we will probably win our motions or the ultimate case trial isn't just because the claims our opponents are bringing are completely merit-less.  Their attorney's have made serious mistakes that will end up costing their clients a fortune - about 10x whatever claims they may have hoped to gain against us.

Now I'll have you know a few things about these 2 cases:


1) We've been praying and fasting for these people we're going up against in court, both the principals and their lawyers.  We've been praying that both our hearts and their hearts can be softened and that we might be able to come to a resolution amicably.  We honestly do not wish any harm upon them or their families.  We feel terrible about having to even pursue legal actions.  But our time for defending these claims has expired.  Now it's our turn. 2) We've offered them, repeatedly, concession after concession.  We've lost a lot of money trying to be amicable and to "turn the other cheek". But enough is enough.  We've tried to work out terms for repayments a debtor owes us (yes, he's the debtor, yet he's suing us - go figure).  We've asked for forgiveness of claims that were simply illegitimate.  We've tried to come up with 3rd alternatives.  But, we keep getting stonewalled.


3) We've been the defendant in both of these cases - never counter-suing.  Well, that changed tonight.  We decided, after pleading and begging and praying and trying to talk reason to, well...sue.  We're suing.  We've absorbed their attacks and now, hopefully we can make our claims known to our judge and hopefully she will be persuaded by our facts and the rules of law.

Hopefully we can just put this all behind us once and for all.  But if we need to go the distance for another year, we're ready and willing.

Bullies on the playground never really go away.  Eventually, you've got to stand up to them and punch them back.